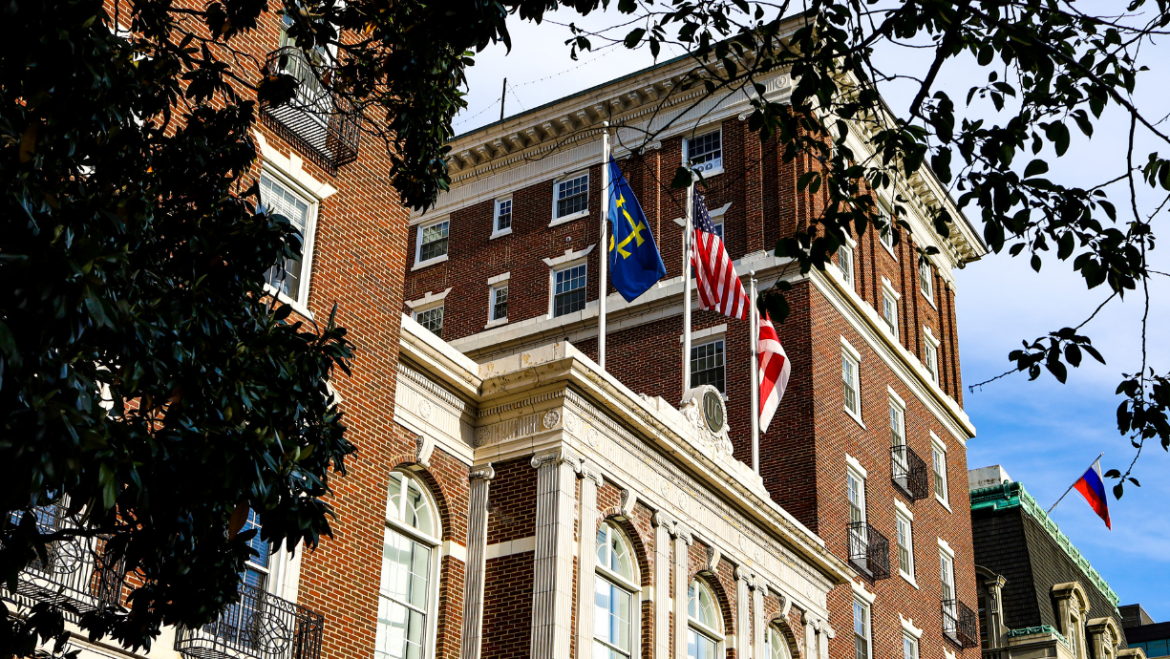 The first organizational meeting of The University Club of Washington, DC was held at the new Willard Hotel on February 22, 1904. A historic spot in its own right, the Willard had just reopened (the first time). Sixty-six university and college alumni gathered to form The University Club – 24 other cities had already formed such clubs. The first Clubhouse was located at 1726 I Street, NW. On the evening of March 11, 1904, the first President elected was then Secretary of War, William Howard Taft, an active Club member. Later the Club moved into its new quarters, a brownstone at 930 Sixteenth Street, NW. The Club developed a most appropriate theme: “Enter all of ye who have a degree of good fellowship and learning.”

Under Taft’s guidance the Club membership grew, and in 1907, 364 members attended the annual banquet at the Raleigh Hotel. With growth and membership pledges, land was purchased in 1909 at 15th and I Streets, NW, to build a larger facility. Construction costs were raised from the sale of 2,000 shares @ $100 each. In 1912, former Club President and now President of the United States, William Howard Taft, laid the cornerstone. For almost two decades members let the good times roll… then came the Depression. Club revenues and membership took a turn for the worse and the Club became the headquarters for the United Mineworkers of America, under the leadership of John L. Lewis, who had engineered a low priced buyout. The old Clubhouse at 15th and I Streets, NW, across from McPherson Square, served as the UMW headquarters for many years.

During the roaring 20’s, another prominent organization, the Racquet Club of Washington, decided to build a facility at 1135 Sixteenth Street. It was dedicated by World War I hero General “Black Jack” Pershing in 1921. The Depression had its impact on the Racquet Club as well, and in 1936, University Club members joined the Racquet Club members in their Clubhouse. There was much discussion about a new name and new membership categories and The University Club of the City of Washington, DC, was selected as the new moniker. The Club flourished in the 1940’s, as Washington rapidly grew from a sleepy southern town into a major world capital during World War II. Hard times had passed, and a waiting list for membership became lengthy. In preparation for the 50th Anniversary, a major renovation was performed on the Club premises, including hanging the famous red wallpaper throughout the Lobby and central stairway.

During these ensuing years, the Club was a favorite residence for many Members of Congress. Tip O’Neill preferred the old card room on the third floor and nothing pleased him more than relieving his House colleague, Richard Nixon, of his monies at the poker table. It was a social gathering place for Justices Warren and Black during the era of the Warren Court.

The 1980’s brought the admission of women as members, a $2.5 million renovation, and the establishment of the University Club Foundation. The addition of women members ended the tradition of nude sunbathing on the deck, and the basement’s duck pin bowling alley was converted into the Athletic Center. In 1984, the University Club Foundation was formed as a separate nonprofit entity to support the Club Library and to continue programs which are charitable, educational, scientific, and literary in nature.

The Club underwent extensive renovations in the 1990’s to improve the quality, efficiency and use of the facilities. The overnight guest rooms were overhauled with card entry, enlarged bathrooms, new furniture and cable. The sixth and seventh floors include enhanced amenities for executives. The windows were replaced, bookcases were built into the rooms of University Hall, the Lobby stained, the Library painted, and the Franklin Room redecorated. The front driveway and Club entryway were replaced with stone pavers, gas lanterns, and new landscaping. The Pershing Grille was extensively renovated to include more seating, the creation of the Humidor room, and updated appearance. The Library was renamed the Keefer Memorial Library after a substantial gift in perpetuity to the Foundation was made by the late Leona Keefer to honor the memory of her husband, Arthur, who frequented the Club in the 1950’s.

The University Club attracts members and guests from both the national and international communities. Members’ professions range through the private, public, and nonprofit sectors, including clergy and foreign nationals. Many members democratically participate in the active committee process and regularly attend the Club social events. With warm fellowship among members, well appointed facilities, and family-friendly ambiance “the mansion on Sixteenth Street” continues as a popular meeting place and retreat for members and guests in our vibrant Nation’s capital.

Enter the username or e-mail you used in your profile. A password reset link will be sent to you by email.